Natural Law And The Second Amendment

Our Constitutional Framers who were Deists and/or Spiritually Mature Christians, believed in reincarnation because they -- by virtue of the opening of their own thinking which initiated the functioning of the Natural Laws within their own Mind and Being -- provided many of them access to their own past-life recall (see The Deist Belief In The Pre-Existent Soul).    Further, someone whose thinking and belief system does not interfere with the proper Heightening And Expansion Of Mind, is able to intuitively tap into an Inner Source of Knowledge that transcends the very limited vision and knowledge of this world.   If we use the example of Thomas Paine, he had previously lived as an Ebionite Elder who was hunted down by the Church Of Roman Emperors as a heretic (see The Death Of The Religion Of Jesus).   Thomas Paine who was the product of the Natual Laws evolving his consciousness, was to some degree able to intuitively tap into this Inner Source of Knowledge that existed within his Pre-Existent Soul (see SoulSelf.org) -- which provided him insight into the fact that the Church Of Roman Emperors was to a large degree a religious fraud -- to the degree that even the scriptures which the modern Church relies upon has been severely corrupted and edited to make them support the dogmatic opium of the Roman Emperors who ruled over the Church beginning in the fourth century (see BibleCorruption.com).   And this ability to innately tap into the wisdom of previous lives -- to the degree of even recalling some of them (see Remembering Previous Lifetimes) -- was one of the important doctrines that was suppressed and removed from the Gospel teachings once under the absolute control of the Church Of Roman Emperors.  And Thomas Paine and Jefferson, Washington, Franklin and others who were all enlightened Deists, intuitively knew that the dogma of the Church had virtually little in common with the original teachings of Jesus (see The First Fatal Mistake).

While it is easily demonstrated that the doctrine of the Pre-Existent soul was an integral and foundational teaching of Jesus and the Gospel (see Christian Teachings On The Pre-existent Soul), with the suppression and removal of this important teaching, the modern Church has been spiritually castrated.   Not only does the body of Christian believers lack any understanding of the Natural Laws that control every aspect of their lives (see Conditions Of One's Birth - Life - And Death), but they are not at all prepared to understand either the true spiritual meaning of the Gospels, or the realities of the life they are presently living.   What does this mean?   What did the original framers of the Constitution know that modern Americans generally do not?  It means that both the saints and the despots of man's past, have been returned to this life in a subsequent edition -- as have all their followers who continue to unquestioningly cling to their political and religious leaders -- as they continue the struggles of the past in the present time.    What this means is that Hitler, Stalin, Mao, Pol Pot, as well as every other despot of the past, has been returned to this world in our present time to continue the struggles with the souls who opposed them as opponents on the world's stage in our modern time-frame.   And many of these despots from out of man's past are now political and religious leaders in the United States who are struggling against the Constitutional Framework of Individual Freedom and Liberty.

The first thing that Hitler did when he came to power was to institute gun control and universal health care -- which he then used to put down all opposition to his reign of terror.    Both Hitler and Stalin were looked upon as messianic personalities who inspired the masses to empower them to overthrow the existing political power structure -- inciting the masses to turn against their previous political and religious leaders.   Stalin portrayed them as "useful idiots" who could be relied upon to do his bidding.   Which in short order initiated reigns of terror that instituted the murder and destruction of virtually millions of innocent men, women and children.

This struggle with the absolute corruption of both church and state had been going on since the very dawn of time.   Quoting from Thomas Paine Redux - The American Crisis Resumed:  Prof. Walter Williams lived previously as one of our Constitutional Framers, and  in a commentary entitled America's Move Towards Tyranny he presented an important warning to the American People where he wrote: Supreme Court Justice Louis Brandeis warned, "The greatest dangers to liberty lurk in the insidious encroachment by men of zeal, well meaning but without understanding." The freedom of individuals from compulsion or coercion never was, and is not now, the normal state of human affairs. The normal state for the ordinary person is tyranny, arbitrary control and abuse mainly by their own government. While imperfect in its execution, the Founders of our nation sought to make an exception to this ugly part of mankind's history. Unfortunately, at the urging of the American people, we are unwittingly in the process of returning to mankind's normal state of affairs.    In similar fashion Thomas Paine wrote: "Society in every state is a blessing, but government even in its best state is but a necessary evil in its worst state an in tolerable one; for when we suffer, or are exposed to the same miseries by a government, which we might expect in a country without government, our calamities is heightened by reflecting that we furnish the means by which we suffer!" -- and of course the immortal words: "That government is best which governs least".    Then there is the statement attributed to Thomas Jefferson, Barry Goldwater and Gerald Ford: "A government big enough to give you everything you want, is big enough to take away everything you have".

Gov. Andrew Cuomo stood before the people of New York rationalizing that hunters don't need self-loading rifles (assault rifles?) with large magazines to shoot deer.   Yet, the Second Amendment was not for the preservation of hunters rights -- but rather, as a means for The People to maintain control of their government.   And while more people are murdered with hammers than with what the Secular Progressives portray as assault rifles, they focus on the self-loading guns that have large magazines, because that is the very gun that the American People would use to oppose an out of control government that "...is big enough to take away everything you have".  Our Constitutional Framers who were Enlightened Men of Reason and Evolved Intellect, knew full well that the despots of man's long historical past were constantly returned to this life where they often resumed where they left off -- in a newer edition.   And they were returned to this world to continue the struggles that previously immersed them in abject violence and human suffering.

In The Audacity Of Reason I define intellect as: "...the ability of a person to re-evaluate what they believe to be true when additional and clarifying knowledge is received, and then apply this knowledge in their life so as to intimately embrace the higher truth that has been revealed in the endeavor to receive still Higher Truth."    And in this respect, men of Reason must be cognizant of the undeniable fact that ideologues (both left and right) are generally incapable of learning from their failures.   When a gun ban was instituted in Washington DC, it quickly became the homicide capital of the world.   While Rahm Emanuel preaches gun control in Chicago, nearly every day young innocent children are slaughtered on the altar of Secular Progressive ideology.   It was recently noted that Mayor Emanuel's children attend a school that is protected by armed security guards.   And yet, these same ideologues who have control of the American reigns of government, are working to disarm and take away the people's Second American Rights on a national scale.

Why do the American People need self-loading guns (assault rifles?) with large magazines?   Especially in view of the fact that more Americans are killed by hammers, than the self-loading rifles that Obama and the Secular Progressive neo-coms want to ban?  Why is Barack Obama in the process of importing South American thugs and cartel members to undermine our cities?     Why has the Obama administration armed the Mexican cartels (Fast And Furious) with these same guns which he is attempting to deny to the American People?   Guns that will be needed by Americans to defend themselves from the imported street thugs who are terrorizing our cities?  Guns that will be needed by the American People to defend their Constitution from the despots of man's past who presently hold the reigns of power in our government today. 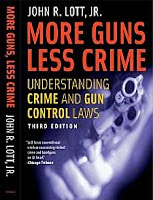 It has been noted that Barack Obama has been in what has been portrayed as campaign mode for the last four years -- demonizing his opposition -- dividing the American People -- promising to transform America into a nation inspired by what has been portrayed as European Socialism.   It has been said that Obama will go forth and incite the ill-informed people to support his gun control agenda.   Yet, the ideologues of the Secular Progressive left refuse to acknowledge the facts that are demonstrated conclusively in the book by Prof. John Lott entitled More Guns, Less Crime.   Why does an American citizen need a self-loading rifle with an extra-capacity magazine?   As both a deterrent to what Prof. Walter Williams portrays as the "normal state" of humanity -- i.e., "The freedom of individuals from compulsion or coercion never was, and is not now, the normal state of human affairs. The normal state for the ordinary person is tyranny, arbitrary control and abuse mainly by their own government" -- and the protection of an armed invasion of one's own home by imported South American street gangs which the administration is presently using to invoke greater government control and even martial law.

Christians have an obligation to protect their family first, then their community, and lastly their nation.   And to this end the Gospel states: "But now if you have a purse, take it, and also a bag; and if you don't have a sword, sell your cloak and buy one." (Luke 22:36).   Further, the protection of one's own house is mandated in the words: "But if any provide not for his own, and specially for those of his own house, he hath denied the faith, and is worse than an infidel" (1 Tim 5:8).   And while Barack Obama and the neo-com Secular Progressive left have even attempted to promote social justice as the fulfillment of the Gospel objectives (see The Abomination Of Obama's Prayer - The Folly Of Social Justice), as can be seen at the foregoing link, the Gospel warns Christians to have no part with those who continue to embrace the immorality of this world -- i.e., "But now I have written to you not to keep company with anyone named a brother, who is sexually immoral, or covetous, or an idolater, or a reviler, or a drunkard, or an extortioner — not even to eat with such a person" (1 Cor 5:11 NKJV) -- and the Gospels present the cause of their poverty and turmoil in the words of Jesus: "...sin no more, lest a worse thing come unto thee" (John 5:14 KJV).

Posted by Allan Cronshaw at 7:14 AM