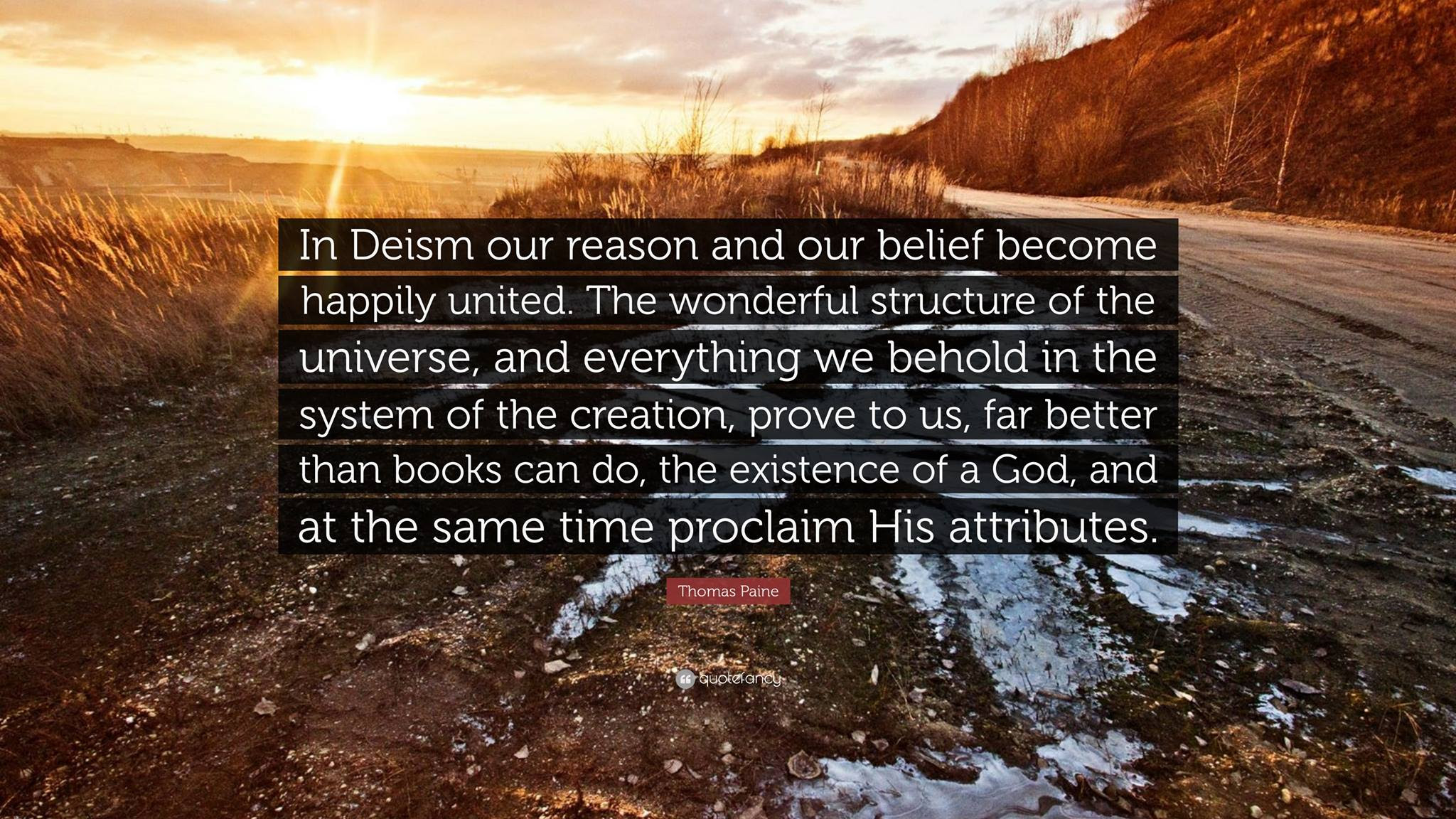 I made a statement to a Deism group and wrote: Deism already has the answers to man's higher purpose when the Clock-Maker Universe is understood (see Understanding The Intelligent Universe - The Clock Maker vs Jalopy Universe http://CausalFactor.Nazirene.org#ClockMakerUniverse . And the group asked me about my system of beliefs. To which I wrote the following:

To answer your question, lets define Deism -- which is the Knowledge and Understanding of the Natural Laws of Creation -- Laws that monitor and control every aspect of life. Which means that all the great thinkers throughout the history of mankind were all by definition, Deists. Something that is not understood by faith-based Christian Theists, is that the original followers of the man Jesus said he achieved all that he did by fulfilling the Law (see Jesus Fulfilled The Law http://OriginalGospel.Ebionite.com#JesusFulfilledTheLaw ) -- AND, they maintained that anyone who fulfills the Law, will accomplish all that the historical man Jesus did. Which means that the man Jesus taught others how to fulfill the Law.
Pythagoras, Plato, Valentinus, Giordano Bruno, Gurdjieff, all understood the Natural Laws -- and were therefore Deists. The difference between these men and other people, is seen in the fact that their success was brought about because of their understanding of the Natural Laws -- i.e., the heart of Deism. And they taught their students and disciples the workings of the Natural Laws, in order for each of them to achieve success. And ANYONE who truly understands the Natural Laws of Creation -- often referred to as the Laws of Nature and Nature's God -- can achieve the levels of mental and spiritual development of the preceding men of great vision.

All the error of mankind -- all the confusion about life and its meaning and purpose -- is all the result of the ignorance of the Natural Laws. Which means that by definition, only a Deist can prevail over the ignorance and confusion of this realm. And in the same way that faith-based believers have been subverted by "priest-craft" and Revealed-Religion, so too has the world of Science been misguided by Scientism which is the dogmatic ignorance of Atheism (see The Disconnected World Of Scientism http://CausalFactor.Nazirene.org#TheDisconnectedWorldOfScientism ). BUT, great change is on the horizon because there are modern cutting-edge scientists who have thrown off the shackles of scientism, and have proven the wisdom of the mystics (see The Findings Of The Physicist http://KnowThySelf.Nazirene.org#FindingsOfThePhysicist ) -- who, having come to embrace a higher understanding of the Natural Laws, have begun to open the door to Higher Knowledge that has broken the shackles of man's ignorant past (see The Mental-Shackles Of Faux-Science And Fallacious-Religion http://KnowThyself.Nazirene.org#MentalShackles ).

Deism has permitted itself to be mentally and spiritually undermined, because it has embraced Scientism and the folly of Revealed-Deism. Thereby undermining Deism as a viable spiritual path. When I use the term "viable spiritual path", that means that a true Deist will be able to progress beyond the level of knowing of the masses who have no understanding of the Natural Laws -- and in understanding the Natural Laws, these genuine Deists will be able to walk a path of mental-expansion and spiritual-deepening that brings about a state of Enlightenment. While there is a Rational explanation and understanding for every aspect of life, without an understanding of the Natural Laws that support the Higher Rational Reality of Mind, all of life very quickly sinks into abject confusion and ignorance. And this is true of the priests of Scientism, as well as the priests of Revealed Religion. Which means that with respect to answering your question as to my belief system, there is no earthly religion or system that I would ascribe to -- but everything I know has been revealed to me because of my understanding and fulfillment of the Natural Laws. And all future progress of mankind will be brought about by those who understand the Laws of Nature and Nature's God by whatever name they call themselves.

Posted by Allan Cronshaw at 4:26 AM